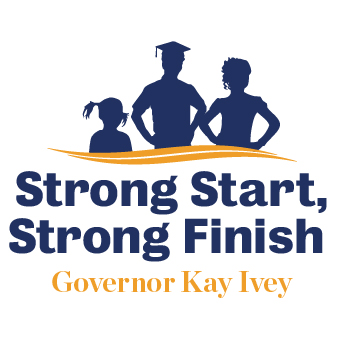 Pre through Three is focused on ensuring the Alabama First Class Pre-K program is available to all families who choose to participate and ensuring that all of Alabama’s third graders are proficient readers by 2022. CS4AL will ensure that a computer science course is offered at all of Alabama’s middle and high schools by 2022. Advanced Training, Better Jobs will prepare 500,000 more Alabamians to enter the workforce with high-quality postsecondary degrees, certificates or credentials by 2025.

Over the past year, Governor Ivey has secured progress toward each of the SSSF goals in the following ways.

First Class Pre-K Program and the P-3 Pilot
Under Governor Ivey’s leadership, investment in First Class Pre-K has grown in one year from $77.5 to $96 million. The $18.5 million increase in 2018 was the largest ever single-year increase in program funding approved by the Legislature.

Looking forward to the 2018-2019 school year, First Class Pre-K will officially break the 1,000 classroom mark with 1,040 classrooms serving 18,720 four-year-olds, which will reach 35 percent of the eligible four-year-old population.

In December 2017, Governor Ivey announced that Alabama was awarded a $1.5 million grant from the W.K. Kellogg Foundation to support the launch of the Pre-K-3rd Grade Integrated Approach to Early Learning pilot program (“P-3”), starting with 35 classrooms in 2017-2018. The program will grow to 75 classrooms in the upcoming 2018-2019 school year.

The Alabama Campaign for Grade-Level Reading
Governor Ivey empaneled a diverse, 100-member Executive Team to assist in establishing 11 regional councils that will recruit a host of local campaigns for grade-level reading. The Executive Team met for the first time in June 2018, and the team will begin establishing the regional councils and recruiting local campaigns during the fall of 2018.

In the 2018 Legislative Session, Governor Ivey secured a $4 million increase for the Alabama Reading Initiative (ARI), which will be used to refocus ARI on grades K-3 and to reinforce the gains produced by the First Class Pre-K program.

During Summer 2018, Governor Ivey established the Alabama Summer Achievement Program (ASAP) for students who are reading below grade level proficiency in grades 1-3. Governor Ivey created an ASAP pilot program at four elementary schools in Montgomery County, serving hundreds of children, with plans for expansion in Summer 2019.

In March 2018, Governor Ivey and the Alabama State Board of Education approved the Alabama Digital Literacy and Computer Science Course of Study and Standards. Currently, only 10 other states in the nation have computer science standards.

On April 2, 2018, Governor Ivey championed and signed legislation creating the Alabama School of Cyber Technology and Engineering. Based in Huntsville and scheduled to open during the fall of 2020, the school will be a destination magnet school that will also serve as the hub for computer science professional development in Alabama.

To achieve that goal, and in light of the recent reauthorization of Carl D. Perkins Career and Technical Education Act, Governor Ivey is working to increase the efficiency of our workforce development programs to meet Alabama’s growing economic demands and to incentivize more private-sector partners to offer apprenticeships.

Governor Ivey is happy with the progress thus far but plans to further work toward these goals and continue to strive for improvement in Alabama’s education system.