To accommodate the growth, Hyundai plans to invest $300 million and create 200 jobs at its only U.S. manufacturing center. The latest milestone for HMMA was made official after the recent signing of a project agreement with Governor Ivey at the state Capitol.

“Over the years, we have developed an enduring partnership with Hyundai, and it’s been great to witness the profound economic impacts of the company’s continued investments in Alabama,” Governor Ivey said. “Hyundai’s new growth plans in Montgomery will help prepare the state’s auto industry for the EV revolution while also aligning with our strategic initiatives such as Drive Electric Alabama.

“This is another major milestone for our friends at Hyundai,” she added.

As part of the project, HMMA will begin plant expansion projects ranging from additional warehouse space to enhanced assembly processes to support electric vehicle production. Production of the Santa Fe Hybrid will begin in October 2022, and the Electrified GV70 will roll off the assembly line in December 2022.

“Hyundai Motor Company is taking its first steps in electric vehicle production in the United States. We are excited to showcase our team members’ skills in producing electric vehicles here in Alabama,” said Ernie Kim, HMMA’s president and CEO.

These clean mobility vehicles will join the Elantra sedan, Santa Fe and Tucson SUVs and the Santa Cruz sport adventure vehicle on the Montgomery assembly line.

Greg Canfield, Secretary of the Alabama Department of Commerce, said the introduction of EV production at HMMA positions the Montgomery plant for the future in an industry that is rapidly shifting its production focus to electric models.

“With this EV expansion, Hyundai is again demonstrating that Alabama’s auto sector is concentrating on what the future holds for the industry and that it will continue to evolve to meet all challenges,” Secretary Canfield said. “This is an exciting development both for Hyundai and for our dynamic automotive manufacturing sector.”

The addition of the Santa Fe Hybrid and the Electrified GV70 will strengthen HMMA’s position as a preferred employer in Montgomery and continue to increase high-quality jobs at the plant and throughout its supplier base. Hyundai has invested $1.8 billion in the Alabama operation, which currently employs over 3,200 full-time workers.

Montgomery officials praised Hyundai for its strong support of the Alabama manufacturing plant.

“Hyundai and Montgomery have a powerful partnership,” Mayor Steven Reed said. “We look forward to continuing to strengthen this relationship in the coming years and working to support this tremendous investment.”

“Our commitment to our partnership with Hyundai Motor Manufacturing Alabama continues to deepen, and we are so honored by this significant investment,” added Montgomery County Commission Chairman Elton Dean. “Together, we are charting the course for success and opportunity in the River Region.”

Cedric Campbell, chair of the Montgomery Area Chamber of Commerce, pointed out that HMMA has expanded over 15 times since April 2002, when the automaker announced its plans to make the city its North American industrial home.

“Partnership and teamwork are key to this kind of economic growth, and we are grateful for the impact this kind of investment will have on the entire region,” Campbell said. 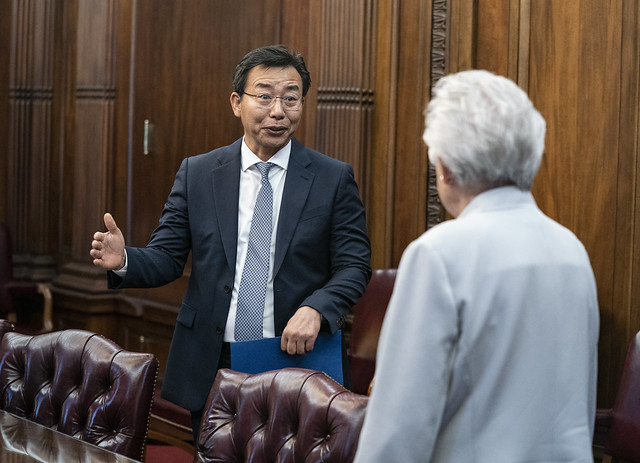