ATTALLA – Governor Kay Ivey today joined representatives of Koch Foods and local leaders in Etowah County to announce that the company plans to invest more than $50 million to establish a state-of-the-art grain storage and distribution facility in Attalla.

Koch Foods said the new poultry feed-mill will create 28 new jobs with an annual payroll of $1 million. The Attalla facility, designed with technologically advanced features for maximum efficiency, will support the company’s recently expanded processing plant in nearby Gadsden.

“Koch Foods already has significant operations in Alabama, and this new investment will magnify the company’s economic impact on the state,” Governor Ivey said. “This project adds a robust new dimension to the industrial sector in the state and permits us to strengthen our longstanding relationship with a major employer.”

project at a groundbreaking ceremony in the Northeast Alabama city. The new 130-acre facility in Attalla will have the ability to hold more than 1 billion bushels of corn, served directly by rail.

“We are very excited about building one of the most technologically innovative grain storage facilities in the world,” said Matthew Herman, Koch Senior Vice President of Fresh Operations. “We continue to expand our business in Alabama and are thankful for the cooperative environment between business and government in the state to get things accomplished.”

In 2018, Koch announced an $80 million expansion of its Gadsden plant as part of a growth project involving 200 new jobs. That project adds a fourth processing line to the facility, boosting production capacity and making the Etowah County operation one of the largest poultry-processing plants in the country.

Park Ridge, Illinois-based Koch employs more than 3,000 employees in Alabama and works with hundreds of local businesses and farmers at its four processing complexes in the state.

“We’re excited that Koch Foods has chosen Attalla for this large, high-tech facility. We are thankful to have 28 new, high-paying jobs in our community, and this facility will build on the strong focus on industry and innovation that are woven into the history of Attalla,” Mayor Larry Means said.

“In addition to the long-term operational jobs, there will be over 200 people working to build the facility here in Attalla over the next 18 months,” he added. “The economic impact of construction alone will be huge for the City of Attalla and all of Etowah County.”

Construction is already under way at the Koch site, and the facility is expected to become operational in fall 2021. The company will start assembling a management team in the first quarter of 2020 and will begin interviewing prospective production workers in early 2021.

“This project qualifies for two of the industrial sectors the Gadsden-Etowah Industrial Development Authority has targeted — Logistics and Food & Farming,” Hooks said. “Locating this state-of-the-art facility will go a long way in solidifying Etowah County’s position as a national leader in both sectors.”

Founded in 1985 as a one-room operation, Koch Foods has grown to become one of the nation’s largest vertically integrated poultry producers, with locations across Alabama, Georgia, Illinois, Mississippi, Ohio and Tennessee. The privately held company has more than 13,000 employees. 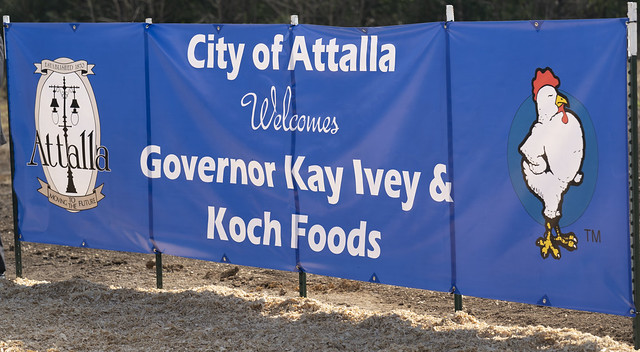