LIVINGSTON – Governor Kay Ivey joined executives with Enviva and local leaders today to announce that the company expects to invest approximately $175 million to construct a wood pellet production plant in Sumter County that would provide an economic boost to West Alabama.

The proposed facility, to be located at the Port of Epes Industrial Park, is expected to create a minimum of 85 full-time jobs and generate an estimated 180 additional jobs in logging, transportation and local services in the region.

This milestone was officially announced today at a ceremony held on the square of the Sumter County Courthouse in Livingston.

“We are very excited about the prospect of Enviva joining Alabama’s business community with a very important manufacturing project in Sumter County,” Governor Ivey said. “Enviva is the world’s largest producer of wood pellets for energy, and Alabama is proud to support the company’s efforts to provide a renewable fuel solution for worldwide power generation.”

“This project will create quality jobs for West Alabama’s citizens, improved timber markets for local landowners, and enhanced economic activity for the entire region,” she added.

“We are privileged to have been invited by the people of Alabama to invest in a remarkable community like Epes,” said John Keppler, Chairman and Chief Executive Officer of Enviva.

“With its thriving forest resources, great local workforce and favorable transportation logistics, we look forward to the opportunity to grow sustainably in West Alabama for decades to come.”

Bethesda, Maryland-based Enviva expects the wood pellet production plant in Epes to become the next facility in its strategic asset cluster in the Gulf region, which envisions other pellet plants in the states of Mississippi and Alabama, and a future deep-water marine terminal at the Port of Pascagoula.

Enviva said the proposed production facility would principally utilize a mix of softwood and scrap from mills sourced from within a 75-mile radius. The sustainably sourced pellets produced at the plant would be transported by barge via the Tennessee-Tombigbee Waterway to the terminal at Pascagoula, then exported to Europe and Asia.

“Enviva’s announcement that it expects to build a new wood pellet plant at the Port of Epes represents a major win for West Alabama,” said U.S. Rep. Terri Sewell, whose district includes the area. “The jobs and economic development this project would create would serve to uplift not only individuals and families but the entire Sumter County community.”

Greg Canfield, secretary of the Alabama Department of Commerce, said the Enviva project aligns perfectly with the Ivey Administration’s strategic goal of sparking job creation in rural communities across the state.

“We’re committed to helping create jobs through economic development in Alabama’s rural areas, and the opportunity for Enviva to locate this wood pellet plant at Epes is a significant development for Sumter County,” Secretary Canfield said. “Enviva is expected to make a major investment in this facility, which would drive economic growth in the area through the creation of direct and indirect jobs.”

Dr. Ken Tucker, president of the University of West Alabama in Livingston, said university representatives, community leaders and state officials teamed with business and industry partners for more than a year and half to help bring the Enviva project to fruition.

“We are excited to have a company of Enviva’s international reputation interested in Sumter County. The significant number of jobs created, and the large amount of capital invested would truly be transformational for our region,” Dr. Tucker said.

Enviva does not own forestland but works with suppliers that meet its strict sustainability criteria. The company’s sourcing practices ensures it takes only wood from responsibly managed working forests and it does not take wood from forests that are being converted out of forest use. It has several procedures in place to ensure it does not source wood from high conservation value bottomland forests and has created a proprietary monitoring system that works with its supply chain partners to verify and document the origin of all of their wood. 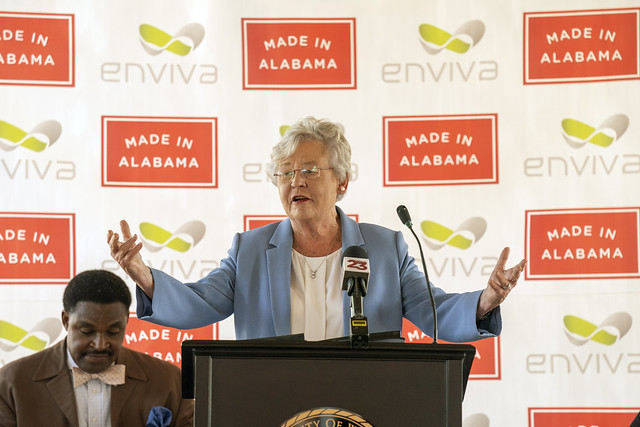