MONTGOMERY – Governor Kay Ivey, during a bill signing ceremony Monday, signed four bills supporting veterans and the military. The governor signed House Bills 58, 83, 88 and 92. Earlier this month at Maxwell Air Force Base, the governor also signed into law House Bill 388, the Military Family Jobs Opportunity Act.
“Throughout my career, I have advocated for our service men and women, and I will continue to do all I can as governor to offer my support to those who have given us so much,” Governor Ivey said.  Alabamians are steadfast in their support for the military, and I am proud to strengthen Alabama’s bond with the military through these five bills I have signed into law.”
HB 58, known as the “Parks for Patriots Bill”, grants free admission to active or retired service members, who are Alabama residents, to state parks operated by the Department of Conservation and Natural Resources. An appropriate active or retired military identification card, a driver’s license with a military veteran designation, a valid Department of Defense Form or any other documentation prescribed by law or administrative rule must be shown to obtain free admission. In November 2017, Governor Ivey announced that entry into Alabama’s State Parks was free for all veterans. At that time, Rep. Dickie Drake said he planned to file a bill in the 2018 Regular Session that would permanently codify Governor Ivey’s Parks for Patriots plan into law.
“I am so proud to have sponsored a bill that allows veterans and current military to have free admission to Alabama State Parks,” Rep. Dickie Drake said. “With Memorial Day close at hand, this should be something nice for our Veterans and our military who have given so much and make so many sacrifices; we can never fully repay them!”
Governor Ivey also signed HB 83, the Veterans Employment Act, and HB 88, which gives preference in competitive bids on state government  contracts to businesses owned by veterans. Rep. Dickie Drake also sponsored HB 88. The Veterans Employment Act, sponsored by Rep. Connie Rowe, gives a tax credit to small businesses that hire unemployed veterans.
“This was an opportunity to help both our veterans and small businesses at the same time. Incentivizing the hiring and retention of our military veterans by Alabama small businesses allows us to acknowledge their service and provide them with more job opportunities,” Rep. Connie Rowe said. “Small businesses will benefit, not only by qualifying for the tax incentive, but also by bringing employees into their businesses with the admirable traits and skills acquired during military training and service. It’s a win-win piece of legislation.”
HB 92, sponsored by Rep. Barry Moore, allows a person who meets the military service and award requirements to be issued a windshield placard displaying an appropriate military honor or veteran status. The placard will permit parking in designated military parking places. The bill makes it unlawful for a person to park in these designated military places without distinctive placard.
“In our great nation, we recognize that freedom is a right given by God, but we also know that right is protected by those who fight for it,” Governor Ivey concluded. “I am grateful for the hard work and support of the Alabama Legislature for passing strong legislation supporting our service men and women.”
Earlier this month at Maxwell Air Force Base, Governor Ivey signed into law HB 388, the Military Family Jobs Opportunity Act. Through this bill, professional licensing boards are required to issue licenses and certificates to military spouses who hold licenses and certificates from other states. In the case a state has lesser requirements, the state will issue temporary licenses. Sen. Gerald Dial and Rep. Thad McClammy were the sponsors of this legislation.
###
Photo Gallery: 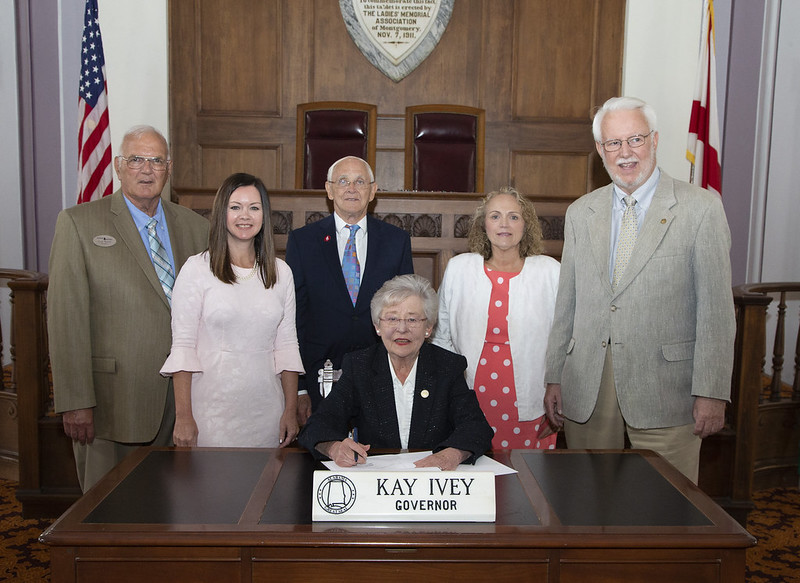