BIRMINGHAM – Governor Kay Ivey announced on Tuesday that the Alabama travel industry grew by $1 billion in 2017, to a record of $14.3 billion in expenditures, and increased jobs by 7,399 to some 186,906 employees. The industry grew by 7 percent and attracted an additional 810,000 visitors to top 26 million guests for the first time in state history.
“Every part of the state saw dramatic growth, from the beautiful mountains of the Tennessee Valley to the stunning white sand beaches along the Gulf Coast,” Governor Ivey said. “Most communities generated more revenue and gained jobs through hosting meetings, conventions, sporting events and visits to museums, among other attractions. These gains were especially seen in those areas which have invested in sporting venues which attract youth sports tournaments.”
The industry notched its highest growth in 2017, since the Gulf Coast oil spill in 2010, when tourists spent $9 billion, said Alabama Tourism Director Lee Sentell.
“This is such great news for the state of Alabama. In 2017, we had more visitors than at any other time in our history – visitors whose spending added one billion dollars more to the state economy than the year before,” Director Sentell said. “The site of today’s announcement, Barber Vintage Motorsports Museum, is one of the reasons for these gains. The Barber Museum and Park generated almost 100,000 hotel room-nights of occupancy in 2017 and had 352,000 visitors, an increase of more than 35 percent from the year before.”
Despite a wet July, Baldwin County added 82,238 guests for a total of 6.4 million guests who spent a record $4.4 billion. Jefferson County’s hospitality industry grew by a record 9.8 percent and 148,498 tourists. About 3.3 million total visitors helped Jefferson County cross the $2 billion mark in tourist spending for the first time. In Madison County, an increase of 85,728 visitors yielded a total of 3.1 million guests who spent $1.3 billion for a 9.8 percent increase. In Mobile County, tourism grew by 8 percent. An additional 178,770 visitors meant a total of 3.4 million guests who spent $1.2 billon. Montgomery County, which ranked fifth, added 8,940 guests for a 3.3 percent increase in tourist spending. The city had just under two million visitors who spent $841 million, according to a study by Montgomery economist Dr. Keivan Deravi.
The tourism industry generates millions of dollars for state and local government. The hospitality industry was responsible for $627.5 million in state taxes and an additional $251.6 million in local revenue for a total of $879 million, an increase of five percent over the previous year, the report said. Some $70 million was generated in state lodgings taxes, of which 75 percent benefits the State General Fund.
Deravi says that without those taxes, each household in Alabama would have had to pay $467 in additional taxes to maintain current service levels.
###
A copy of the 2017 Tourism Economic Impact Report can be found here.
Photo Gallery: 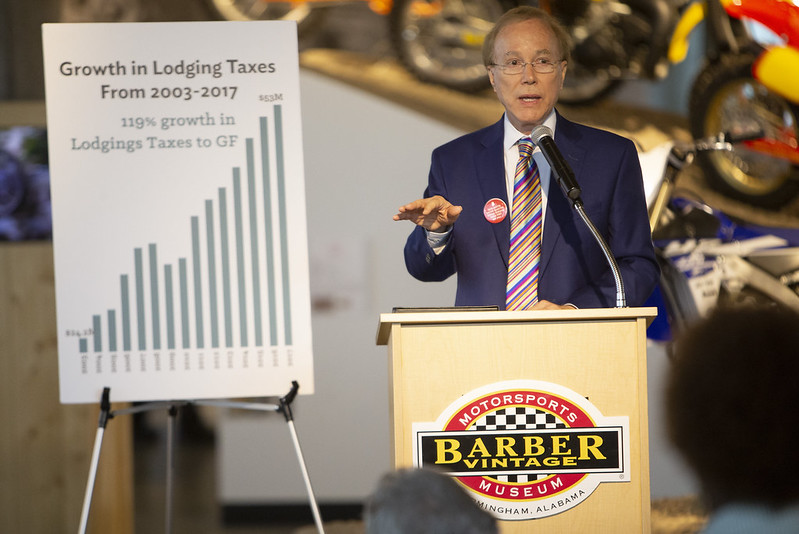