MAPLESVILLE – Governor Kay Ivey on Wednesday announced her Rebuild Alabama Infrastructure Plan at a press conference, alongside a host of legislators, stakeholder groups and other state and local officials.
The Rebuild Alabama plan proposes a 10-cent increase in Alabama’s fuel tax with an index designed to coincide with the rising costs of building roads. The state currently imposes a flat excise tax of 18 cents-per-gallon on gas and 19 cents-per-gallon on diesel, without adjusting for inflation and other construction and maintenance costs.
This combined fuel tax revenue generates 80 percent of Alabama’s transportation funding. The plan’s 10-cent increase will be phased in over the next three years.
New revenue generated by the increase will be dispersed between state, county, and municipal governments in Alabama. These funds are to be used for transportation infrastructure improvement, preservation and maintenance projects. A separate portion of the revenues will go to pay a bond to be issued to finance improvements to the ship channel providing access to the facilities of the Alabama State Docks.
“My Rebuild Alabama Infrastructure Plan is a comprehensive approach to a glaring issue affecting citizens in every corner of the state,” Governor Ivey said. “After 27 years of stagnation, adequate funding is imperative to fixing our many roads and bridges in dire need of repair. By increasing our investment in infrastructure, we are also making a direct investment in public safety, economic development, and the prosperity of our state.”
A 2019 report by the University of Alabama’s Alabama Transportation Institute and Alabama Transportation Policy Research Center found that cars and trucks are putting approximately 69 billion miles on Alabama’s roadways annually, a 17 percent increase over the past 15 years.
With more travelers on the road, areas of congestion and public safety are a major concern. One-third of all traffic fatalities are estimated to be a direct result of a deficient roadway feature, according to the American Society of Civil Engineers.
State Representative Bill Poole has been instrumental in the crafting of this plan and will sponsor the Rebuild Alabama bill during the 2019 Regular Legislative Session.
“Today’s announcement is a major step in the right direction to improving Alabama’s infrastructure. I appreciate Governor Ivey for leading the charge and allowing me to help develop this plan,” Rep. Poole said. “A number of studies have concluded that Alabama’s aging infrastructure cannot continue to operate in its current state without severe consequences; these are simply facts we can’t ignore.”
According to TRIP, a national transportation research group, 30 percent of major roads and highways in Alabama are in poor or mediocre condition because of inadequate state and local funding. In 2015, Alabama’s roads received a D+ grade in a report card released by the American Society of Civil Engineers.
Ideally, county road resurfacing should operate on a 15-year schedule; yet, county governments are currently operating on a 56-year schedule. Additionally, a striking 1,200 bridges are classified as structurally deficient in Alabama, ranking the state as 17th in the nation. Even worse, counties should be operating on a 50-year bridge replacement schedule, but they are actually operating at a rate of 186 years.
State Senator Clyde Chambliss, who represents parts of rural Alabama, will carry the bill in the Senate.
“With one of the South’s biggest ports and the state’s growing economic development success, improving our poor infrastructure system allows us to remain competitive nationally and globally,” Sen. Chambliss said. “As a civil engineer, I applaud Governor Ivey’s efforts to address this pressing issue and look forward to working with stakeholders, from all levels of government, to ensure her infrastructure bill is successful.”
State government currently provides 40 percent of Alabama’s total transportation funding, while the rest comes from the federal government. However, increasing uncertainty about federal infrastructure funding has created a sense of urgency for states to have reliable funding sources.
Over the past five years, 37 states have increased revenue in some way for their transportation budget.
###
Photo Gallery: 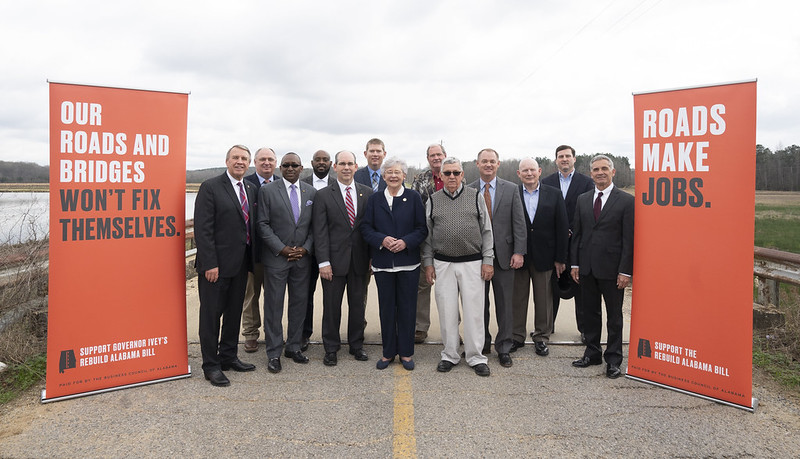