MONTGOMERY – Governor Kay Ivey on Tuesday announced her decision to accept the FirstNet and AT&T plan to deliver a wireless broadband network to the state’s public safety community that will bring advanced tools to help Alabama’s first responders save lives and protect communities.
“Keeping Alabama’s residents, visitors and first responders safe is of the highest concern,” Governor Ivey said. “From volunteer emergency responders in our rural communities to those on the front lines in more populated areas, our public safety community deserves access to the tools they need most. This collaboration with FirstNet and AT&T will allow us to provide our first responders increased capabilities to communicate as effectively and efficiently as possible, while also ensuring that our residents and businesses have the best possible services provided to them in times of emergency.”
AT&T, in a public-private partnership with FirstNet, will build, operate and maintain a highly secure wireless broadband communications network for Alabama’s public safety community at no cost to the state. The FirstNet network will drive innovation and create an entire system of modernized devices, apps and tools for first responders.
Following an in-depth evaluation of the proposed AT&T and FirstNet plan, as well as proposals by other potential vendors, Alabama selected the FirstNet and AT&T public-private partnership, bringing public safety the overall best value solution with the least risk.
“Reliable, effective communications systems and networks are most important when lives are on the line,” Alabama Law Enforcement Agency Secretary Hal Taylor said. “I am very pleased Alabama is opting in to be part of FirstNet. This network, and the new tools it will provide, will help our first responders do their jobs more safely and effectively, and it will help save lives all across the state.”
FirstNet will transform the way Alabama’s firefighters, police, emergency medical services (EMS) and other public safety personnel communicate and share information. Specifically, it will:
Connect first responder subscribers to the critical information they need in a highly secure manner when handling day-to-day operations, responding to emergencies and supporting large events like college football games, which attract more than 100,000 fans to home games at some of the larger universities in the state.
Provide priority access to data communications for public safety personnel in agencies and jurisdictions across the state during natural disasters, such as the 2011 Super Outbreak that produced a record number of tornadoes in the state.
Enhance and expand network coverage across Alabama’s diverse landscape, benefitting first responders and residents throughout the state’s rural areas, including mountainous and tribal lands.
Provide first responders with access to dedicated network assets that can be deployed for additional coverage and support when needed.
Drive infrastructure investments and create jobs across the state.
Usher in a new wave of dependable innovations for first responders. This will create an ever-evolving set of life-saving tools for public safety, including public safety apps, specialized devices and Internet of Things technologies. It also carries the potential for future integration with NextGen 9-1-1 networks and Smart Cities’ infrastructure.
FirstNet and AT&T designed Alabama’s network solution with direct input from the state and its public safety community, including the Alabama First Responder Wireless Commission (AFRWC) who, on Sept. 21st, voted unanimously in a special-called meeting to send an “opt-in” letter of recommendation to Governor Ivey.
The AFRWC is comprised of multiple state, local, and tribal public safety organizations and professional associations. The Commission is chaired by Secretary Hal Taylor of the Alabama Law Enforcement Agency. By working closely with the AFRWC, FirstNet and AT&T crafted a plan to meet Alabama’s unique communications needs, including:
Expanding rural coverage beyond what is currently available from commercial carriers.
Offering affordable data services to public safety across the state.
Delivering a network for public safety with continuing expansive geographical coverage and increasing redundancy and resiliency.
“Governor Ivey’s decision to join FirstNet comes after the state considered a number of options to bring public safety the best communications solution,” FirstNet CEO Mike Poth said. “FirstNet and AT&T are extremely pleased to have delivered the network plan that best meets Alabama’s unique needs. We look forward to connecting first responders across the State’s diverse landscape, providing them access to the only network purpose-built for public safety’s life-saving mission.”
The decision enables FirstNet and AT&T to begin creating an entirely new wireless ecosystem for public safety communications. Alabama’s first responder AT&T subscribers will have immediate access to quality of service and priority access to voice and data across the existing nationwide AT&T LTE network.
Preemption for primary users over the AT&T LTE network is expected by year-end. This means first responder subscribers, including fire and rescue services, law enforcement, emergency medical services, emergency management and 9-1-1 personnel, will have dedicated access to the network when and where they need it – 24/7/365, like their mission.
“We appreciate the seriousness and diligence Governor Ivey and her team brought to the discussion of Alabama’s participation in this nationwide public safety broadband network. It matches our own commitment to delivering this first-of-its-kind communications solution,” AT&T Alabama Assistant Vice President of Legislative and External Affairs Wayne Hutchens said. “AT&T is honored to bring the FirstNet Network to Alabama and connect its public safety community to the life-saving technologies they, and our citizens, deserve.”
For more information on FirstNet, please visit FirstNet.gov/mediakit and att.com/FirstResponderNews.
​###
Photo Gallery: 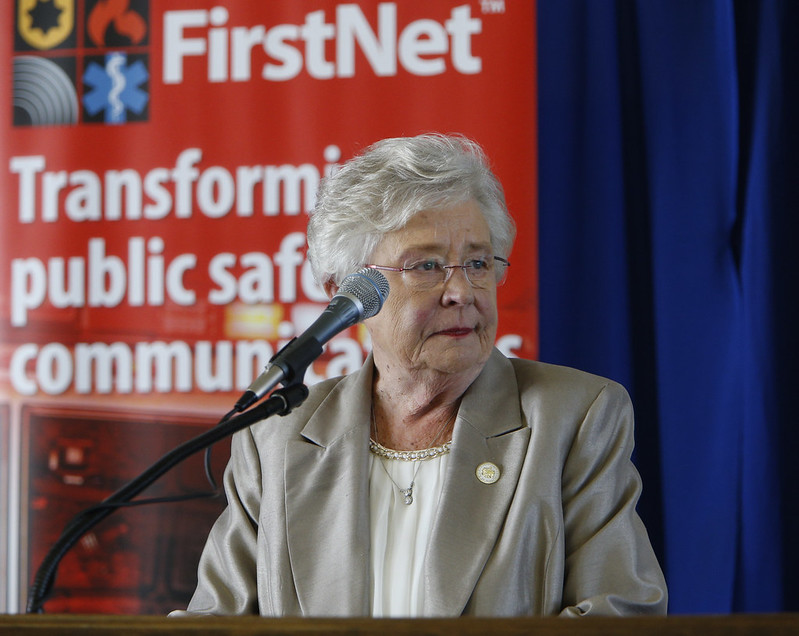