History of the Mansion

The Alabama Governor’s Mansion is the official residence of Alabama’s chief executive and family.

This gracious, 115-year-old home possesses a rich history that makes it one of Alabama’s most unique landmarks.

The current mansion is Alabama’s second. Our state first acquired a residence for its governors in 1911, during the term of Governor Emmett O’Neal. Before that time, governors resided in private homes or even local hotels during their tenure in office.

The first Governor’s Mansion was a Beaux Arts brownstone built in 1906 that served as the home of nine Alabama governors from 1911 to 1950. The last governor to live in this mansion was Gov. James E. “Big Jim” Folsom. The residence was eventually demolished in 1963 to make way for the interstate highway.

Gov. Folsom played an instrumental role in acquiring the current Alabama Governor’s Mansion. During his first term, Gov. Folsom became fascinated with an impressive and uniquely Southern home located a few blocks from the original Governor’s Mansion. The Governor would often take walks through the neighborhood, befriended the owner of the home, Mrs. Robert Fulwood Ligon, Jr. He often told Mrs. Ligon that her home would make a more suitable mansion for the state’s governors, with its grand staircase and majestic columns.

Following in his father’s footsteps, Robert Ligon, Jr. also enjoyed a distinguished career in public service. Among his many accomplishments, he served as Clerk of the Alabama Supreme Court, Adjutant General of Alabama during the Spanish American War and Inspector General of the Alabama National Guard with the rank of Brigadier General. He was also mayor of Tuskegee from 1886 to 1888, before moving to Montgomery to practice law in the early 1890s.

In 1895, Robert Ligon, Jr. married Aileen Means, and the couple eventually had one daughter named Emily. The Ligons were considered one of Montgomery’s most prominent families.

In 1907, Robert Ligon, Jr. purchased a lot on Perry Street in a fashionable area of Montgomery and commissioned architect Weatherly Carter to build his family a home suitable to their position in society.

The result was a graceful, neoclassical structure that upon its completion came to be known as one of Montgomery’s most elegant homes. For 43 years the Ligons occupied the mansion, building a life that included many family events and social occasions in the stately home. Robert Ligon, Jr. died in 1939, and his wife Aileen in 1950.

Shortly before her death, Aileen Ligon was spending much of her time with her daughter Emily, who had moved out of state. Around this same time, Gov. Folsom had established a commission to research the possibility of finding a new residence for the state’s governors. Consensus was growing that the original Governor’s Mansion was outdated and not entirely accommodating for official entertaining.

Upon hearing this news, Aileen Ligon wrote a letter to Gov. Folsom asking him to consider having the state buy her home for the Governor’s Mansion. Gov. Folsom was highly in favor of this suggestion, having long considered the Ligon home the perfect residence for Alabama’s chief executives.

Near the end of Gov. Folsom’s term, the state had still not committed to purchasing a new mansion. Additionally, Governor-elect Gordon Persons, who was to take office in January 1951, was hesitant about the expense of such an endeavor. He did not want to be perceived as extravagant by the citizens of Alabama. However, Gov. Folsom convinced him that the benefits of a new mansion would outweigh the cost, and in October 1950, the state bought the house for $100,000, the first time a house in Montgomery had sold for that amount. 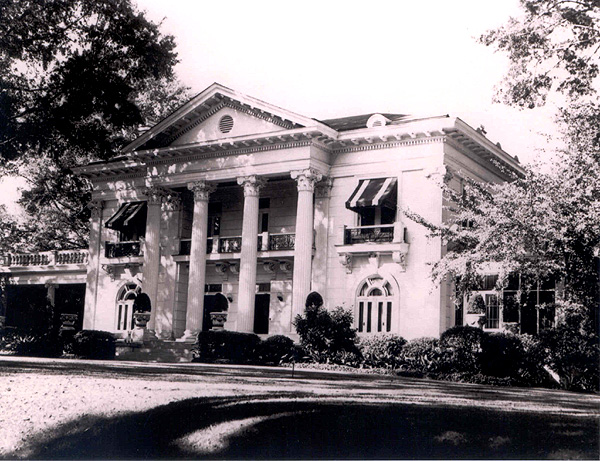 With the sale final, work began to prepare the house for occupancy. Much had to be done in a short time. Gov. Persons’ wife Alice played a large role in redecorating the home.   Note: Other photos of interior:  (1)  (2)  (3)

Just before the Governor’s office changed hands, the Persons’ moved into their new home. They did not have much time to settle in before preparations began once again, this time for a reception.

Instead of having an inaugural ball, Gov. Persons thought the citizens of Alabama should have an opportunity to see their new state home and decided to host an open house for the public. The event drew a crowd of 6,000, with people lined up for blocks waiting to see the new Governor’s Mansion.

And so the Mansion began its unique joint roles as the people’s house and home of the First Family.

The next family to move into the new mansion was the Folsoms in 1955. Gov. Folsom was beginning his second term in office and could now enjoy the home he had worked so hard to make the Governor’s Mansion.

The Folsom family, with their seven children, was a lively addition to the mansion. The vivacious first family loved to entertain and often held parties in the back garden.

Another first family that celebrated many milestones in the Governor’s Mansion was the Wallaces. The Wallaces spent several years in the home, nearly eighteen in all, and celebrated many occasions, including birthdays and weddings.

George Wallace began his first of four terms as governor in 1963, and moved into the Mansion with his wife Lurleen and their four children. The Wallace children spent many years growing up in the home. Mrs. John Blue Hill, a next door neighbor at the time, remembers fondly that George, Jr. used to come over and play his guitar for her and that the youngest Wallace, Lee, used to have fun playing on the Mansion grounds.

At the end of Gov. Wallace’s term, the family did not have to worry with packing because in 1967, Lurleen became governor, the first and only time a woman served as governor of Alabama, until Governor Kay Ivey took office, as the second female governor, in 2017.

With grace and composure, Gov. Lurleen Wallace juggled multiple roles as wife, mother and chief executive of Alabama. Even with all her duties, she found time to keep the Mansion open to the public. Visitors and tour groups were given a warm welcome to the home of Alabama’s first families.

Unfortunately, Gov. Lurleen Wallace’s term in office was brief. After an extended battle with cancer, she passed away in May of 1968. Both the Wallace family and the citizens of Alabama were deeply saddened by the loss.

Like Gov. Lurleen Wallace, Martha Brewer felt the Governor’s Mansion was a source of pride for the citizens of Alabama, and she put much effort into making it a symbol of Alabama’s greatness.

An innovative first lady, Mrs. Brewer used her creativity and talents to give the mansion a face lift. Using the mansion’s large dining room table as her workstation, Mrs. Brewer set up her portable sewing machine and made draperies. She also had the furniture refinished and reupholstered and installed new carpet.

Mrs. Brewer’s hard work earned her national acclaim. At a National Governor’s Conference she was one of four wives selected from throughout the nation to speak at the Governor’s Wives Closed Session. Her presentation was titled “Management of the Mansion – from Entertainment to Tours.”

Beginning in 1971, George Wallace was back in the governor’s office and once again living in the mansion. Having run for president, the Alabama governor was now a national figure and it was not uncommon for him to be in the spotlight. The mansion was sometimes the venue for one of his many public appearances.

Although not a political occasion, one of the most important events for Gov. Wallace at the mansion was the wedding reception of his daughter Peggy in 1973. Just as Emily Ligon had done 54 years earlier, Peggy Wallace celebrated her special day with the mansion as a beautiful backdrop. (Another photo from the reception).

Over the years many family occasions, such as Peggy Wallace’s wedding, have been celebrated at the Governor’s Mansion. Not only is this beautiful structure symbolic of the great state of Alabama, it is also representative of the many wonderful families that have called it home while serving our state. (Photos:  Gov. James /  Gov. Hunt /  Gov. Folsom / Gov. Riley)

Special thanks go to the Alabama Department of Archives and History for providing the photographs displayed in this section, as well as the historical documents used in compiling the narrative. If you would like to learn more about our state’s history please visit the Department’s website at http://archives.alabama.gov.