The Alabama Governor’s Mansion was designed in 1907 by T. Weatherly Carter. It was originally the private home of the Ligon family. Since 1951, it has served as the official residence of the Governor and First Family of Alabama.

The front doors of the Mansion open up to the Reception Hall, which features the central and most impressive architectural feature of the house: the grand staircase. The room has elaborate woodwork and oak floors with cherry and mahogany banding.

The circa 1900 French crystal wall sconces and chandelier over the staircase originally hung in the Roosevelt Hotel in New Orleans. They were purchased for the Mansion by First Lady Alice Persons in 1951.

The carpeting for the grand staircase was custom designed by Jimmy Sellars in 2013. He used motifs from the elaborate molding as inspiration for his design.

The rug in the center of the room has the Coat of Arms on it. The coat of arms consists of a shield on which appear the emblems of the five governments that have held sovereignty over Alabama. The flags of Spain, France, Great Britain, and the Confederacy are bound by the flag and shield of the United States. The two bald eagles symbolize courage. The crest is a model of the ship, the Baldine that came to settle a colony near present day Mobile, the motto beneath the shield in Latin for “We Dare Defend Our Rights.” 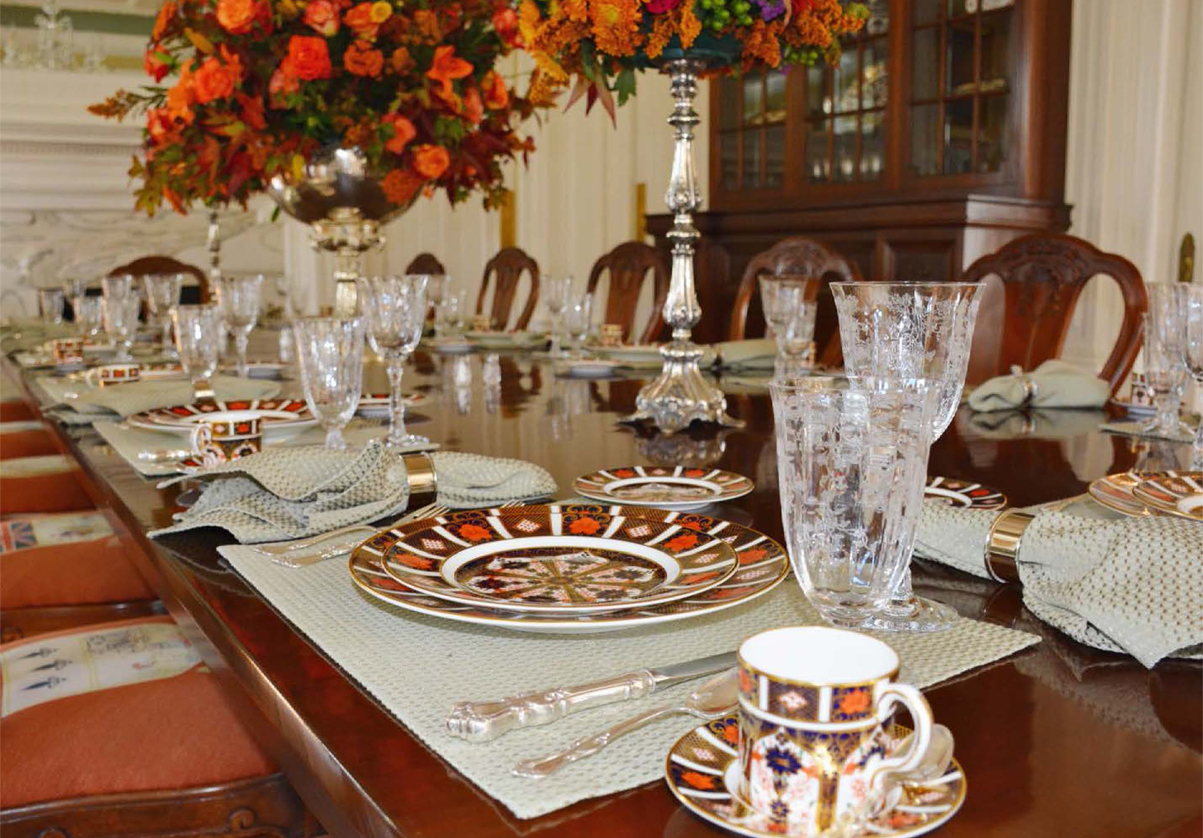 Many First Families and their guests have enjoyed meals and fellowship in the Mansion’s Dining Room. The mahogany table and chairs, commissioned for the Mansion in 1959 by First Lady Mary Jo Patterson, were made by Southern Craftsman Company of Andalusia, Ala. The petit point seat covers, which depict coats of arms and symbols associated with Alabama history, were made by the Mountain Brook Chapter of the American Needlepoint Guild.

The chandelier above the table is Czechoslovakian crystal and is made up of 1,368 prisms. It was purchased by First Lady Cornelia Wallace in 1974.

The sterling silver candelabra, punch cups and tray were made for the USS Alabama, which was christened in 1942 and served in the Pacific Theatre during World War II. 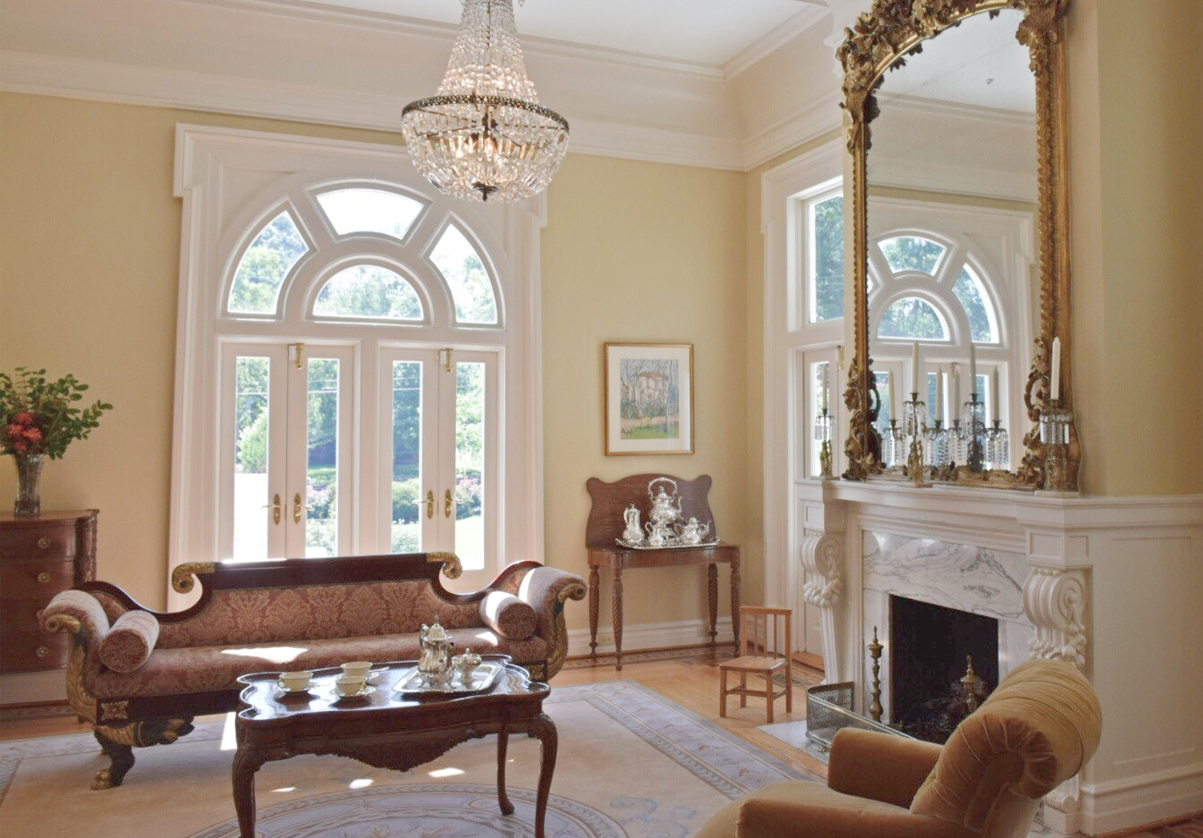 The late 19th century gilt frame mirror originally hung in a another Montgomery home and were acquired by the Ligon family in an estate sale in 1916. This makes it older than the mansion itself.

The three-piece girandole set on the mantel appears in photographs from Governor Persons 1951 inaugural reception at the mansion. The marble around the fireplace was part of the 1950 renovation and is from Sylacauga.

The five-piece sterling silver tea set was made in England in 1859. It was purchased for the Mansion in 1939 by First Lady Juliet Dixon. 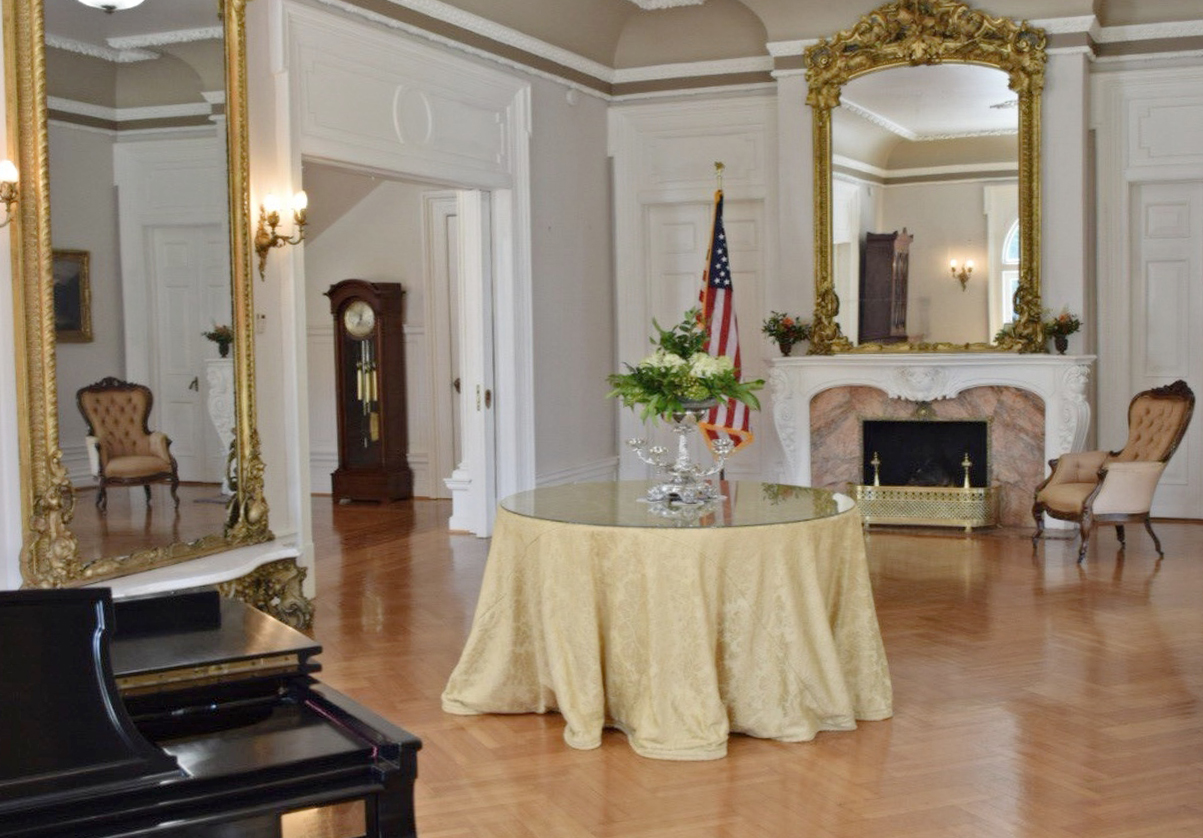 The Drawing Room is used as a family room or den area in the home. The 19th century gilt framed pair of pier mirrors which rest on low marble-top tables were also purchased in the estate sale in 1916. The fireplace equipment, wall sconces and ceiling fixtures are also original to the house. The over mantel mirror matches the mirror in the Parlor. The ebony Steinway grand piano was donated in 1983. 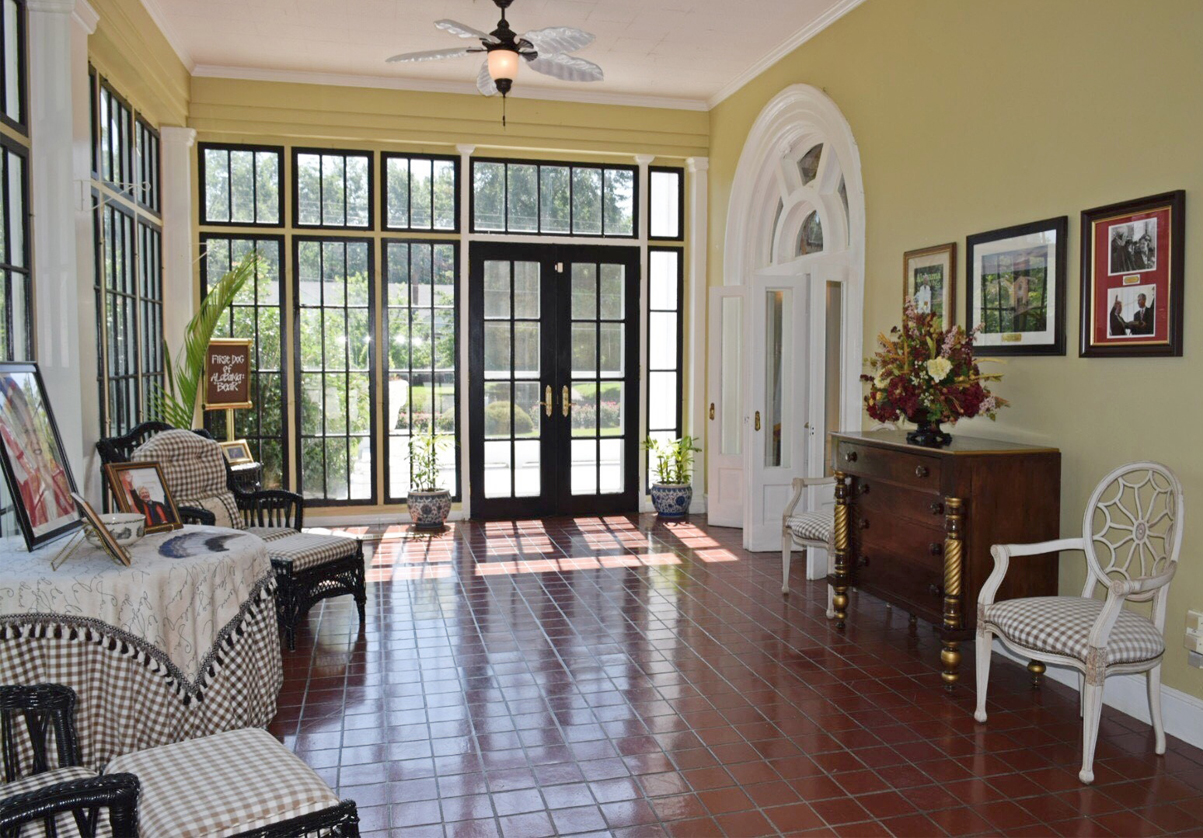 Governors and their families enjoy the sun porch as a place to relax as well as entertain. Through the windows you can view the secret garden, the Hill House and the Alabama shaped swimming pool.

Flag Memo to Honor the Victims of the Shooting in Highland Park, Illinois

MONTGOMERY – Governor Kay Ivey on Thursday announced that more than $2 million in state funding is being awarded to cities and counties for various road and bridge projects. The fundi…

MONTGOMERY – Governor Kay Ivey on Friday announced that Alabama’s preliminary, seasonally adjusted May unemployment rate is 2.7%, a new record low, down from April’s rate of 2.8%,…

MONTGOMERY – Governor Kay Ivey on Wednesday announced that James Hardie plans to hire 200 additional workers as the company expands its manufacturing plant in Prattville, where it pro…